Find this article at:
go.ncsu.edu/readext?411712
— Written By Dee Smith

Another exciting year of wonder in the garden has come and gone for the students of St. Egbert’s School. Students have spent 6 weeks through this school year learning many concepts that make a successful garden and a healthy environment. Concepts that students learned this school year include soil sciences, plant parts, pollinators, vermicomposting and worms and landfill management practices. The students were able to use hands on experimental learning during most of their lessons to learn each concept. 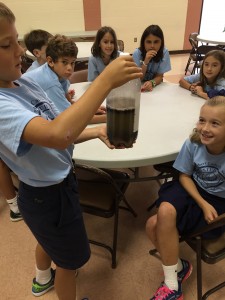 During week one students learned about soils through an activity where students brought soil from home. This allowed a conversation about where the students gathered their soil from, it also let them talk about what part of the county they are from, because St. Egbert’s School is a private school, students come from all over the county. Soils were then all mixed together in a container and separated in bottles for each classroom then water was added and students took turns doing the “soil shake” dance. After a lesson on soil properties, students predicted what would happen to the soil over time and some grades charted their predictions. Students were allowed to keep their soil bottles over the course of the month, further discussion on soils was able to happen after we left within their classrooms. 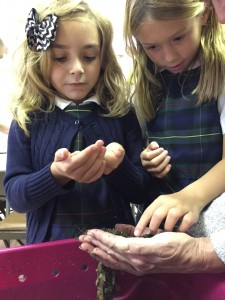 Girls play with worms too.

Another favorite lesson was that of vermicomposting. Students learned about composting with worms, worm parts and behavior. They were able to learn about worm behavior by using the worms themselves. They were given worms and resources and were able to complete 3 experiments on behavior, they predicted what would happen during each experiment then watched what the worm’s behavior was. This was another type of hands on learning where students really got to get in and feel their way through a topic. 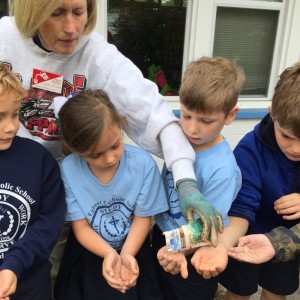 Master Gardener, Jean Hagger is handing out seeds to students at St.Egbert’s school.

Week 6 students were able to put their skills to use by planting a pollinator garden. Each raised bed was planted with a variety of plants and seeds to attract both bees and butterflies and hopefully the occasional hummingbird. To offer more diversity to the area, each raised bed had different plantings. Some of the plants and seeds that were planted included parsley, lavender, short sunflower seeds, lantana, and pentax and celosia.